No man is good enough to govern another man without that other’s consent.

His crazy proposals are so extreme, few of the initiatives pose serious threat

Surrounded by child-props, Barack Obama yesterday proposed a semi-automatic ban so extreme that it could potentially outlaw up to 50% of all long guns in circulation and up to 80% of all handguns.

Originally, Obama’s allies had announced they would reintroduce the 1994 ban on commonly-owned, defensive firearms. That was until they found out that they would look like fools, since that semi-auto ban was largely the law of Connecticut on the day the Newtown shooting occurred — and didn’t cover Adam Lanza’s AR-15. (which Lanza did not even use in the shootings)After that, gun grabbers just kept adding more and more guns until they would register (or ban) a huge percentage of the defensive guns in existence.

So where are we now?

Obama’s crazy gun ban is now being denounced by many Democrats. And, although you don’t “pop the cork” until Congress adjourns, it will probably take the magazine ban down the toilet with it.

This means that gun owners’ focus must now shift to the part of Obama’s agenda which poses the most danger because it is most likely to move: the requirement that the government approve every gun transfer in America — the so-called universal background check.

All of you know why this is a problem. But how do you explain it so simply that even a congressman can understand? Let’s take a crack at that:

ONE: THE FBI’S “SECRET LIST” WHICH IS BEING USED TO BAR AMERICANS FROM OWNING GUNS IS INSIDIOUS

The FBI’s database currently contains the names of more than 150,000 veterans. They served their country honorably. They did nothing wrong. But, because they sought counseling for a traumatic experience while risking their lives for America, they have had their constitutional rights summarily revoked, with no due process whatsoever.

You want to know something else? The “secret list” could soon include tens of millions of Americans — including soldiers, police, and fire fighters — with Post Traumatic Stress Disorder, attention deficit and hyperactivity disorder, and even post-partem depression. This would be achieved under the 23 anti-gun “executive actions” that Obama announced yesterday.

TWO: THE FBI REFUSES TO INSURE US THAT IT ISN’T TURNING ITS “SECRET LIST” INTO A NATIONAL GUN REGISTRY

Our legislative counsel drafted the Smith amendment in 1998 to prohibit the FBI from using the Brady Check system to tax gun buyers or put their names into a gun registry. But the FBI refuses to tell us — or even to tell U.S. Senators — how (or whether) it is complying with the Smith amendment. Why in the world should we give the FBI more authority and more names if it abuses the authority it already has?

This is the inherent problem with any background check, where gun buyers’ names are given to a government bureaucrat. Is there any way to make sure that once a name is entered into a computer, that it doesn’t stay there permanently?

This concern is especially valid, considering how federal agents are already skirting the laws against gun owner registration. Several dealers around the country have informed GOA that the ATF is increasingly going into gun shops and just xeroxing all of the 4473’s, giving them the names of every gun owner who purchased a gun through that shop — and setting up the basis for a national registration system.

This is illegal under the 1986 McClure-Volkmer law, but that has apparently not stopped it from being done. If every gun in America has to go through a dealer, this will create a mechanism to compile a list of every gun owner in America. And, as we have seen with New York Governor Andrew Cuomo, who has just been legislatively handed such a list, when that happens, the talk immediately turns to “confiscation.”

THREE: AS A RESULT, REQUIRING GOVERNMENT APPROVAL OF EVERY GUN OWNER IN AMERICA WOULD DO NOTHING BUT CREATE A PLATFORM FOR NATIONAL GUN REGISTRATION AND CONFISCATION.

As alluded to above, New York Governor Andrew Cuomo now has a comprehensive gun registry. This is the most dangerous thing that New York legislators could have done — as Cuomo has made it clear he’s considering gun confiscation of lawfully-owned firearms.

How nice. He’ll let gun owners “permit” their guns for now — so that, presumably, they can be confiscated later, just as certain defensive weapons were confiscated in New York City during the Mayor David Dinkins administration in 1991.

FOUR: THE FBI REFUSES TO COMPLY WITH THE LAW GUARANTEEING THE RIGHTS OF LEGITIMATE PURCHASERS

The Brady Law requires that the FBI correct erroneous denials of firearms purchases. And it requires that it reply, initially, within five days. According to attorneys familiar with the problem, the FBI NEVER, EVER, EVER complies with the law. In fact, it increasingly tells aggrieved legitimate purchasers to “sue us” — at a potential cost of tens of thousands of dollars.

FIVE: EVEN UNDER CURRENT LAW, THE BRADY SYSTEM HAS BROKEN DOWN REPEATEDLY

Since its inception, the FBI’s computer systems have often gone offline for hours at a time — sometimes for days. And when it fails on weekends, it results in the virtual blackout of gun sales at gun shows across the country.

According to gun laws expert Alan Korwin, “With the NICS computer out of commission, the only place you could legally buy a firearm — in the whole country — was from a private individual, since all dealers were locked out of business by the FBI’s computer problem.”

Of course, now the President wants to eliminate that last bastion of freedom!

Recently, the FBI’s system went down on Black Friday, angering many gun dealers and gun buyers around the country. “It means we can’t sell no damn guns,” said Rick Lozier, a manager at Van Raymond Outfitters in Maine. “If we can’t call it in, we can’t sell a gun. It’s cost us some money.”

The bottom line: Our goal is to insure that Obama’s politicized dog-and-pony show doesn’t produce one word of new gun law. Not a single word.

And the biggest danger right now is universal background checks — which would create a platform for national registration and confiscation.

We would note that, in addition, Obama is attempting to illegally enact gun control through unlawful and unconstitutional “executive actions.” .

ACTION: Click here to contact your senators and congressman. Urge them to oppose the universal background check because it is a platform for national firearms registration and confiscation.

Stop in to TheGunShowOnline (forum) and check out the latest Gun News and info – add some yourself if you like!!

Napolitino vs. Napolitano on Gun Control

by Gary North
Tea Party Economist
Recently by Gary North: The Loss of Trust in Political Leaders
Think of this as an ideological shoot-out at the political OK Corral.
First, Judge Andrew Napolitano.

I am proud to support the President and Vice President’s effort to combat gun violence in our country. In the aftermath of the tragic Newtown shooting, the Department of Homeland Security (DHS), together with the Department of Justice (DOJ), and the FBI have worked to identify measures that could be taken to reduce the risk of mass casualty shootings. In the coming days, DHS will expand and formalize coordination of ongoing efforts intended to prevent future mass casualty shootings, improve preparedness, and to strengthen security and resilience in schools and other potential targets. DHS will work with partners at all levels of government, to address five critical areas intended to reduce the risk of mass casualty shootings in the United States: Prevention, Protection, Response, Education, and Research/Evaluation. DHS will also work with law enforcement to refresh, expand and prioritize the implementation of nationwide public awareness efforts such as the “If You See Something, Say Something™” campaign. This is a critical issue that requires immediate attention and I look forward to supporting the President and this Administration as we move ahead.”

This pretty much sets forth the two positions.

I was amused to see that Janet Napolitano added TM – trademarked – to the DHS’s marketing campaign slogan, “If you see something, say something.” Joe Goebbels would have appreciated that one! He was always on the lookout for ways to influence public opinion. Here is a woman who is committed to property rights of a certain kind – trademarking – but not of another kind: reserving the right to own guns. Here is a card-carrying federal bureaucrat.

My attitude is this: the Second Amendment announces in principle the sovereignty of the armed citizen. For as long as Americans possess this right, they will not need to use their guns to revolt.

We don’t need to shoot tyrants. We only need to prepare ourselves for the day when the Feds run out of enough money to enforce their trademarked slogans. That day is coming.

My next “gun project” is a Romanian SAR-2 in 5.45×39 “Rehab” project. I hope you enjoy. I picked this gun up a while back. It has been “kind-of” tact’ed  out. The minute I laid eyes on it I knew what had to happen. Stay tuned as I walk through the steps of this project… 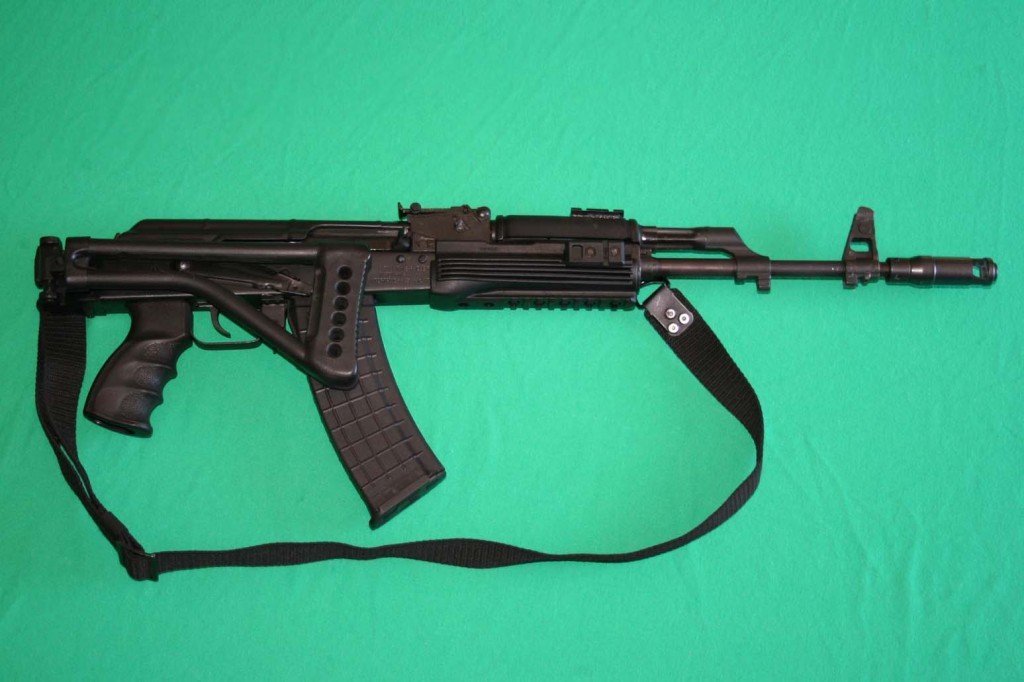 More on this story – later…