What Does the Bible Say About the Right to Bear Arms?

What Does the Bible Say About the Right to Bear Arms?

The Second Amendment to the United States Constitution reads: “A well regulated Militia, being necessary to the security of a free State, the right of the people to keep and bear Arms, shall not be infringed.” 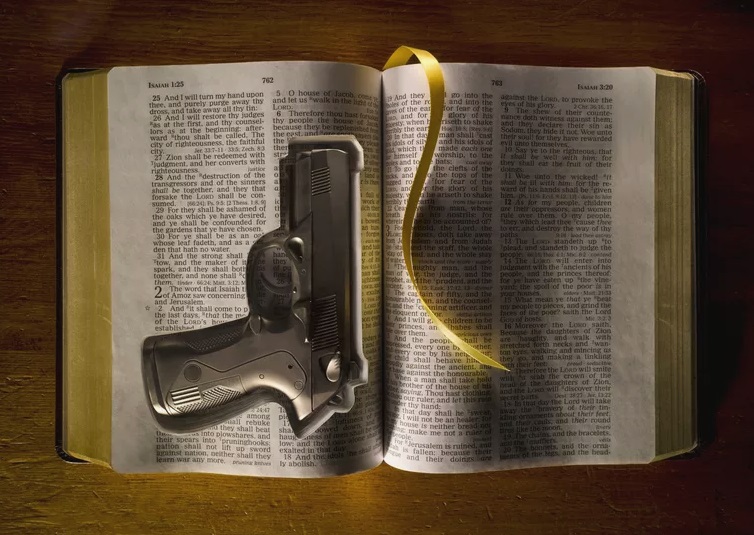 In light of recent mass shootings, however, this right of the people to keep and bear arms has come under heavy fire and heated debate.

So, what are the concerns for Christians in this debate over stricter gun laws? Does the Bible say anything about the right to bear arms?

According to conservative leader and Wall Builders founder David Barton, the original intent of the Founding Fathers when writing the Second Amendment was to guarantee citizens “the biblical right of self-defense.”

Richard Henry Lee (1732–1794), a signer of the Declaration of Independence who helped frame the Second Amendment in the First Congress, wrote, “… to preserve liberty, it is essential that the whole body of the people always possess arms, and be taught alike, especially when young, how to use them…”

Obviously, the Bible does not specifically address the issue of gun control, since firearms like we use today were not manufactured in ancient times. But accounts of warfare and the use of weaponry, such as swords, spears, bows and arrows, darts and slings were well-documented in the pages of the Bible.

As I began researching biblical perspectives on the right to bear arms, I decided to speak with Mike Wilsbach, the manager of security at my church. Wilsbach is a retired combat veteran who also teaches personal defense classes. “To me the Bible couldn’t be clearer on the right, even the duty, we have as believers to self-defense,” said Wilsbach.

He reminded me that in the Old Testament “the Israelites were expected to have their own personal weapons. Every man would be summoned to arms when the nation confronted an enemy. They didn’t send in the Marines. The people defended themselves.”

And in Psalm 144:1, David wrote: “Blessed be the Lord, my rock, who trains my hands for war, and my fingers for battle…”

Besides instruments of warfare, weapons were used in the Bible for the purpose of self-defense; nowhere in Scripture is this forbidden.

In the Old Testament, we find this example of God sanctioning self-defense:

“If a thief is caught in the act of breaking into a house and is struck and killed in the process, the person who killed the thief is not guilty of murder.” (Exodus 22:2, NLT)

In the New Testament, Jesus sanctioned the use of weapons for self-defense. While giving his farewell discourse to the disciples before going to the cross, he instructed the apostles to purchase side arms to carry for self-protection.

He was preparing them for the extreme opposition and persecution they would face in future missions:

And he said to them, “When I sent you out with no moneybag or knapsack or sandals, did you lack anything?” They said, “Nothing.” He said to them, “But now let the one who has a moneybag take it, and likewise a knapsack. And let the one who has no sword sell his cloak and buy one. For I tell you that this Scripture must be fulfilled in me: ‘And he was numbered with the transgressors.’ For what is written about me has its fulfillment.” And they said, “Look, Lord, here are two swords.” And he said to them, “It is enough.” (Luke 22:35-38, ESV)

Conversely, as soldiers seized Jesus at his arrest, our Lord warned Peter (in Matthew 26:52-54 and John 18:11) to put away his sword: “For all who take the sword will perish by the sword.”

Some scholars believe this statement was a call to Christian pacifism, while others understand it simply to mean in a general sense that “violence breeds more violence”.

Rendered in the English Standard Version, Jesus told Peter to “put your sword back in its place.” Wilsbach explained, “That place would be at his side. Jesus didn’t say, ‘Throw it away.’ After all, he had just ordered the disciples to arm themselves. The reason … was obvious—to protect the lives of the disciples, not the life of the Son of God. Jesus was saying ‘Peter, this is not the right time for a fight.'”

It’s interesting to note that Peter openly carried his sword, a weapon similar to the type Roman soldiers employed at the time. Jesus knew Peter was carrying a sword. He allowed this, but forbid him to use it aggressively. Most importantly, Jesus did not want Peter to resist the inevitable will of God the Father, which our Savior knew would be fulfilled by his arrest and eventual death on the cross.

Scripture is quite clear that Christians are called to be peacemakers (Matthew 5:9), and to turn the other cheek (Matthew 5:38-40). Thus, any aggressive or offensive violence was not the purpose for which Jesus had instructed them to carry a sidearm just hours earlier.

Life and Death, Good and Evil

A sword, as with a handgun or any firearm, in and of itself is not aggressive or violent. It is simply an object; it can be used either for good or for evil. Any weapon in the hands of someone intent on evil can be used for violent or wicked purposes. In fact, a weapon is not required for violence. The Bible doesn’t tell us what kind of weapon the first murderer,Cain, used to kill his brother Abel in Genesis 4. Cain could have used a stone, a club, a sword, or perhaps even his bare hands. A weapon was not mentioned in the account.

Weapons in the hands of law-abiding, peace-loving citizens can be used for good purposes such as hunting, recreational and competitive sports, and keeping peace. Beyond self-defense, a person properly trained and prepared to use a firearm can actually deter crime, employing the weapon to protect innocent lives and prevent violent offenders from succeeding in their crimes.

In The Life and Death Debate:

“To permit a murder when one could have prevented it is morally wrong. To allow a rape when one could have hindered it is an evil. To watch an act of cruelty to children without trying to intervene is morally inexcusable. In brief, not resisting evil is an evil of omission, and an evil of omission can be just as evil as an evil of commission. Any man who refuses to protect his wife and children against a violent intruder fails them morally.”
Now, let’s return to Exodus 22:2, but read a little further through verse 3:

Why is it considered murder if the thief is killed during a daytime break-in?

Pastor Tom Teel, an associate pastor entrusted with overseeing the security personnel at my church, answered this question for me: “In this passage God stated that it’s okay to protect yourself and your family. In the dark, it is impossible to see and know for certain what someone is up to; whether an intruder has come to steal, inflict harm, or to kill, is unknown at the time. In the daylight, things are clearer. We can see if a thief has come just to swipe a loaf of bread through an open window, or if an intruder has come with more violent intentions. God does not make a special dispensation to kill someone over theft. That would be murder.”

Scripture, we know, does not promote vengeance (Romans 12:17-19) or vigilantism, but it does allow believers to engage in self-defense, to resist evil, and to defend the defenseless.
Wilsbach put it like this: “I believe I have the responsibility to defend myself, my family, and my home. For every verse that I have used as a case for defense, there are verses that teach peace and harmony. I agree with those verses; however, when there is no other alternative, I believe I am charged with the responsibility to defend.”

Another clear basis for this idea is found in the book of Nehemiah. When exiled Jews returned to Israel to rebuild the Temple walls, their leader Nehemiah wrote:

From that day on, half of my men did the work, while the other half were equipped with spears, shields, bows and armor. The officers posted themselves behind all the people of Judah who were building the wall. Those who carried materials did their work with one hand and held a weapon in the other, and each of the builders wore his sword at his side as he worked. (Nehemiah 4:16-18, NIV)

Weapons, we can conclude, are not the problem. Nowhere does the Bible forbid Christians from bearing arms. But wisdom and caution are of the utmost importance if one does choose to bear a lethal weapon. Anyone who owns and carries a firearm should be properly trained, and know and carefully follow all safety rules and laws pertaining to such a responsibility.

Ultimately, the decision to bear arms is a personal choice determined by one’s own convictions. As a believer, the use of deadly force would be applied only as a last resort, when no other option is available, to prevent an evil from being committed and to protect human life.

They’ll have to shoot me first to take my gun. – Roy Rogers