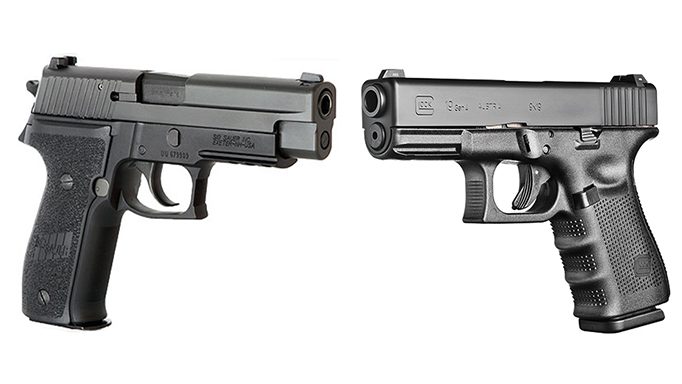 The Glock 19 appears to be the go-to sidearm nowadays for America’s troops.

The Marine Corps Forces Special Operations Command (MARSOC) announced in October that it would be switching to the 9mm Glock 19 from the .45 Colt 1911.

Prior to that announcement, U.S. Army Gen. Mark Milley reportedly requested in March that the Glock 19 find its way into the hands of his soldiers.

But the Marines and U.S. Army weren’t the first to see the benefits of using the G19. In December 2015 it was reported that the U.S. Navy SEALs were trading their Sig Sauer P226 MK25s for the Glock 19.

To examine the Navy SEALs’ switch, we’ve brought in Don Adams (Doitrite) via The Loadout Room to discuss the advantages of both the Sig Sauer P226 MK25 and the G19:

People are so offended by the Glock 19 replacing the MK25. Sig and Glock fans argue whether the Navy SEALs are stupid or smart for hours. I doubt this is going to be an argument that will cease any time soon. I want to add my 2 cents on what might be going on here.

Our military has held its current standard weapons inventory for a couple decades with very little deviation. The only change I observed in my time in the Marine Corps was an introduction to the full-auto capable MK12 with delicious OTM rounds. Times were changing fast, but I got out before the next shifts came in the form of the IAR to replace the SAW in some units, and even the Colt M45 to the Glock 19. MARSOC was the first to take the path to the Glock publicly, if I remember correctly.

I personally don’t care what the military or SF use for their pistol or rifle. Most of the time it is political in nature, as well as being budget based. If the entire military chooses the Glock 19 for their sidearm, just to skip the trials since it’s already NATO approved, so be it.

The end fact is that the pistol, no matter the model, is going to get abused, neglected, and broken. But people put too much stock into the military selection. We civilians are not in the military and when we purchase a gun, we are not getting a used and neglected gun. But let’s just look at the two pistols that are the head of this debate, shall we?

The MK25 is a very big deal, even today, for the metal framed lovers. Now this pistol has been around for decades and has seen plenty of changes, but it is still pretty much the same. I like this pistol for its easy to use controls, and how easy it is to work on for being a DA/SA pistol. The controls on this pistol are a little spread out and are pretty simple in their uses.

The grip on this pistol is actually pretty fat, and it isn’t great with gloves on if you’re vertically-challenged like me. The trigger on this pistol is undoubtedly a good trigger and a standard for other pistols on the market in the DA/SA configuration to look up to. The mag capacity is a little strained at 15, but 18rd mags are available aftermarket. If you prefer the popular thumbs forward grip with gloves, you may hold down the slide stop on the last round.

The Glock 19 needs no introduction. It is the envy of a lot of pistol companies that have followed it into the polymer striker fired world. Anyways, all the controls are tight together and completely unobtrusive and dehorned. You have to mean to use them in order for them to work.

This pistol is the perfect size, and has a size to capacity ratio that other pistols try to match. It takes little training to learn and has a simple manual of arms. It is easy to work on and replacing a part can be done in less than a minute.

But this system does have its problems. The mags don’t fall out easy without a flick to encourage it, and the pistol does need sights replaced almost right away due to the cheap stock sights that are very easy to deform.

I like the Sig MK25 and I like the Glock 19. Both pistols are good, but they are from two different worlds and time periods. Their triggers and their purposes are night and day different.

I see the MK25 as a home defense and duty pistol, while I see the Glock 19 as a carry pistol. The debate about the switch to the Glock 19 will continue forever, just as the Beretta vs Sig debate still lingers. Some people will never accept this switch.

In my opinion, you should just go out, get whatever pistol you like and enjoy shooting it. I don’t really put much stock in military decisions, as I am no longer a part of that gun club. Seriously, I don’t see the point in using their choice as being a standard for your choice since the military doesn’t always make the best choices for its troops. But the only thing I am going to be watch is what parts on the Glock 19 will break constantly. What do you think?