The Legendary M-14 Still Soldiers On

The M-14 is the shortest-lived “official” standard service rifle in the history of the United States. It survives in military service as the M21 sniper rifle in some reserve units, in the U.S. Navy and in special operations units. The rifle is still the weapon of choice in the U.S. military when a 7.62mm NATO combat rifle is required and thousands of them remain in storage. Despite the fact that the M-14 was officially replaced throughout the US Army by the M-16 in the early 1970s, there are those who still prefer it over the lighter rifle. The M-14 forms the basis for the Marine Corps’ Designated Marksman Rifle (DMR) and special operations’ Mark 14, Mod 0 modular rifle.

The history of the M-14 begins in 1945. Ordnance Engineers at the Springfield National Armory had completed development of a new select-fire rifle designated the T20E2. The T20E2 appears to be very similar to an M-1 Garand except for a muzzle brake, a 20-round magazine and a selector switch on the receiver under the rear sight. By late summer of 1945, the new rifle was considered ready for service. The T20E2 was not as reliable as the M-1 and the recoil of the .30-06 cartridge in fully automatic fire made the rifle almost impossible to control. Regardless, the Army ordered 500,000 T20E2 rifles for the invasion of Japan, but the end of the war in August caused the order to be canceled.

The Army was developing a shorter .30 caliber cartridge that would reduce recoil, while maintaining ballistics similar to those of the .30-06. Improvements in smokeless powders accomplished in World War II along with engineering assistance by Winchester resulted in a .308 cartridge that was one third smaller and lighter than the .30-06 but with nearly identical ballistics. The new cartridge would eventually be standardized by the U.S. Army and NATO as the 7.62 x 51 mm cartridge.

A series of trials for a replacement for the M-1 Garand began in August 1952. There were two American rifles, the T44 with a modified Garand gas system and the T47 that used a falling bolt mechanism. The Belgian Fusil Automatique Leger (FAL) and the British EM-2 bullpup rifle were also evaluated. When the tests were completed in December 1952, the FAL proved superior to all other candidates. The British EM-2 and the American T47 were dropped from consideration. Development of the FAL, designated T48, and the T44 rifles continued.

Final testing was conducted in 1956 and included a series of shoot-offs between the T44 and the T48. To this day, the testing is controversial and the fact that the FAL went on to be adopted by the military forces of more than 90 countries, while the T44, type classified as the M-14, was adopted by fewer than 10 nations calls to question the objectivity of the test personnel. On 1 May 1957 the Army announced that the T44 would become the standard U.S. Army rifle and type classified as the M-14. 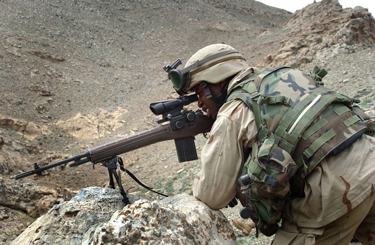 The M-14 was manufactured at four facilities: The Springfield National Armory, Harrington & Richardson Arms, Winchester and Thompson Ramo Woodridge (TRW). There are few differences between manufacturers in terms of reliability and safety.

Despite being beloved by millions of GIs, the M-1 experienced minor problems throughout its service life and the M-14 seemed to have cured most of those. The M-1’s bulky gas cylinder near the muzzle was reduced in size and moved back 8 inches. The way in which the gas was used to operate the action was also modified. When a cartridge is fired in an M-14, some of the expanding gases that drive the bullet forward are bled away through a port in the barrel like the M-1.

With the M-14, however, the gases expand into a short gas cylinder via a vent in the wall of a hollow gas piston rather than against the front of a solid piston connected to an operating rod. When the piston is filled, it moves to the rear, pulling the gas vent out of alignment with the gas port and shutting off the further gas flow. As the piston travels to the rear it uncovers an orifice in the cylinder bottom that vents the gases trapped in the hollow piston out of the gas cylinder. The M-14’s milder action all but eliminated most parts breakage. The M-14 gas flow can be shut off for launching grenades by rotating a spindle valve on the side of the gas cylinder block.

The M-1’s eight-round en block clip was replaced by a 20-round detachable box magazine. This allowed the soldier to “top up” his magazine via stripper clips or loose rounds at any time. This was impossible with the M-1’s clip. And there was no spring steel clip to bounce out of the breech with a distinctive “ding” that could alert an enemy to the fact that the rifle was empty. Further, when a 20-round magazine was empty, it could quickly be replaced.

The basic M-14 is a select-fire weapon; that is, it can be fired in semiautomatic mode or on full automatic. Soldiers quickly discovered that the M-14 in full automatic was impossible to control and was virtually useless tactically. This was partly because of the M-14’s traditional stock design that directed recoil forces to a point above the shooter’s shoulder, forcing the rifle down at the rear and up and to the right at the muzzle. Even the M-14A1 with its modified stock assembly that helped redirect recoil forces and its muzzle brake/compensator was virtually uncontrollable on full auto and the barrels overheated very quickly. As a squad automatic rifle, the M-14A1 was rendered almost useless by its design and the fact that it was never designed or intended for sustained automatic fire. These ineffective weapons were soon to be replaced by the 7.62x51mm M60 machine gun. Other than the M-14A1, virtually all other infantry M-14s had their selector switch removed. The M-14A1 was never fully satisfactory and production was terminated in January 1963, well before production of standard M-14s ceased.

Although the M-14 was type classified in early 1957, no production rifles were manufactured until July 1959.

The M-14 received its baptism by fire in Vietnam in 1961. U.S. Army advisers to the Republic of Vietnam Forces used the M-14 extensively in combat against the Viet Cong. The rifle was considered too large and heavy for the slightly built Vietnamese soldiers to use effectively, although the Army of the Republic of Vietnam (ARVN) soldiers were equipped with M-1 rifles weighing even more. Because of availability issues, M-14 distribution was generally limited to Americans.

Questions also arose regarding the M-14’s accuracy. Rumors began to circulate, some regarding the various manufacturers’ ability to build accurate rifles, others regarding the 7.62x51mm cartridge. It was eventually determined that a combination of factors led to the M-14’s accuracy issues and once the causes were determined, they were rectified with relative ease. The M-14 today is considered to be an accurate and reliable rifle and the 7.62x51mm cartridge itself is considered one of the most inherently accurate cartridges ever produced.

At the time that the M-14 was still in early stages of fielding, the Army was investigating ArmaLite’s AR-15 rifle, developed by Eugene Stoner, Jim Sullivan and Robert Fremont. The Army staff, however, wanted no part of the AR-15 and was stalling its development. Proponents of the M-14, having taken years to get the rifle into service, were actually preventing further development of the AR-15 concept.

Secretary of Defense Robert McNamara eventually demanded a full investigation not only of M-14 versus AR-15 testing but of the M-14’s overall performance in combat. The Army’s inspector general found that several tests had been rigged to show the AR-15 in a poor light, although the AR-15 had outperformed the M-14 in almost every category. In January 1963, Secretary McNamara announced that when that year’s production contracts for the M-14 were fulfilled, production of the rifle would be terminated. At the same time, he announced what was expected to be a one-time buy of 85,000 AR-15 rifles for the Army and 19,000 for the Air Force. The new rifle was type classified as the M-16.

The program to develop a National Match M-14 rifle began in 1959 and the first rifles were produced in 1962. In the first two years, 7,200 National Match rifles were manufactured at Springfield. TRW made 4,874 for the 1964 matches and the final 2,094 for the 1965 matches were rebuilt from existing service rifles at Springfield as production of new rifles had ceased. As it turned out, the National Match M-14 rifles made an excellent platform for a sniper rifle. The Army discovered that the National Match M-14 fitted with a range-finding telescopic sight served very well as a sniper weapon. After experimentation and field-testing the new sniper rifle was type classified as the M21.

As of the time of this writing in mid-2009, the M-14 is still playing an active, if limited, role in the U.S. military. As mentioned, it is in use by several special operations units as the Mk 14, Mod 0 and forms the basis for the Marine Corps DMR. The latter rifle is modified in such a way that it is extremely difficult for the rifle to be converted to select fire. Some units have deployed to Afghanistan or Iraq armed with M-14 rifles.

The civilian versions of the M-14 for the most part use commercial receivers with no capability to accept select-fire components and since the original M-14 was rarely used in full automatic, commercial versions might well be considered for purchase if supplies of government-owned M-14s ever become exhausted.

Despite being replaced as the military’s standard Infantry rifle in the early 1970s, the M-14 will continue to “soldier on” for the foreseeable future. There isn’t any other rifle that does anything appreciably better and there is a substantial inventory of M-14 rifles and components for repair parts.

If you found this Blog, our FaceBook Group or Chat Room helpful – Tell a friend!! We can’t do it without you!! Thanks!!